Flammulated Owl – A ghost in the night

Flammulated Owl – A ghost in the night 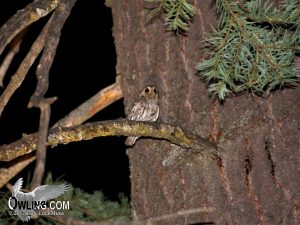 Flammulated Owl is a small (sparrow sized), camouflaged owl with a ventriloqual call.

In the spring and summer months Flammulated Owls return to the western mountain ranges, such as the Rocky and Sierra Mountains, to nest and breed in the high mountain forests. Interestingly, this small owl flies thousands of miles and returns to nest in the same tree and even the same hole. Looking at the vast expanse of territory and forests in these mountain ranges, it is an incredible endeavor that this small sparrow size owl accomplishes yearly. In addition, this is being done in the black of night since it is strictly a nocturnal species.

Searching for Flammulated Owl and actually managing to get satisfying views of one can be a real challenge. Being dark mottled brown, their camouflage is superb against a tree trunk. Even in the daylight, if not in a cavity, this owl disappears next to a tree trunk where it often roosts. With one of the most ventriloquial calls of any owl, locating them by sound takes a lot of practice. Hearing them is one thing but spotting this owl is another. Naturalist and author John Muir, who lived in and promoted the founding of Yosemite National Park, wrote this about the Flammulated Owl over a hundred years ago:

“If a Martian in black livery were to sidle up on the dark side of our planet, all on a moonless night, to spy upon us, he could scarcely keep his business so well concealed as this ghoulish avian mystery.”

Certainly, the density of Flammulated Owls was much higher in the 1800’s giving John Muir a distinct advantage. Of course, not having a pocket flashlight to shine up into the trees was not an advantage John Muir would have had. Nonetheless, finding this small, camouflaged, and highly ventriloquial owl 30 or 40 feet up against the trunk of a thick tree, where they often perch, is challenging.

Timing – When to Search 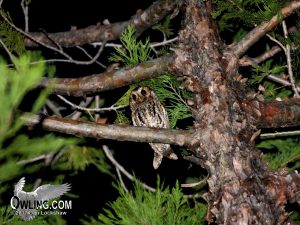 Flammulated Owl is the only small owl with brown eyes.

Timing is also important. Flammulated Owls, being in the US and Canada only during the spring and summer is only part of the story. These owls are almost totally mute outside of their breeding season. April and May are the only months when they regularly vocalize. Their low frequency hoots travel well through the forests and can be heard for long distances. The deep hoots would lead you to believe you were hearing a much larger bird. It is a surprise that these deep sounds come out of this little owl. The best chances of finding a Flammulated Owl or for that fact any owl is by sound. This owl is so small that it is unlikely to see one without hearing it first. The best time to hear them is in the early spring.

Based on the south-west coast, most of our searches for Flammulated Owl obviously happen in the furthest western mountain ranges. The high mountain ranges of the Sierra Nevada mountains in California would be a typical destination. The mountains in Idaho, Montana, Oregon, Washington, Colorado, and even Utah and Arizona are also good places for finding Flammulated Owls. In our searches, the forests on the moist western side of the Sierra Mountains are the best places to find Flammulated Owls on the west coast so this is where we often head. This owl is a high elevation species that is most frequent at 5,000 to 7,000 feet in elevation throughout its range.

A bit of clarification might be appropriate here when discussing where we typically search for Flammulated Owl. Flammulated Owls often live in loose colonial groups. Scattered individual owls are seen and heard in much closer, yet smaller ranges near us. On our owling trips, we are hoping to find multiple owls in a single evening so we are searching the large ranges where larger colonial groups are likely to be found.

Flammulated Owl can be one of the most difficult owls to see in the US and Canada. It is very small, well camouflaged, and very difficult to locate by sound. It is mostly vocal for only a very short time of the year.

We have called this owl “a ghost in the night”. Being strictly nocturnal, its deep hoots are obvious in the forests at night. Yet this little owl so often seems to be just invisible.