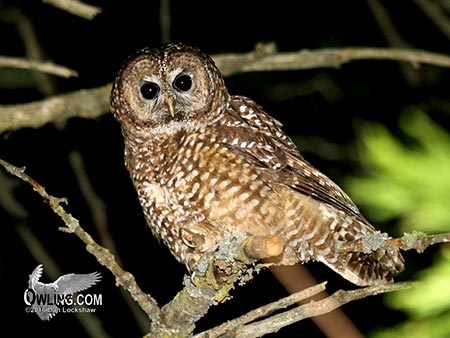 The Spotted Owl is usually sedentary and occupies only one territory most of its life. Its sedentary nature, narrow habitat requirements and vocal habits make it very vulnerable to people. This is probably the most studied bird in the world. It is highly debated while its numbers continue to decline range-wide. Of the three races of Spotted Owl (Northern, California, and Mexican Spotted Owl), only the California Spotted Owl has not been protected by the Endangered Species Act. After being sued, the U.S. Fish and Wildlife Service settled on completing its review of the California Spotted Owl by 2019. Here you will find video, photos, recordings, information, discussion, and a brief field notes section to help identify and enjoy this beautiful owl.

The “agitated contact call” is given by both the male and the female and may be associated with territorial disputes. The sex of the owl is not separable with the “contact calls” but are mainly uttered by females.

No other owl is as well known nor elicits such high debate as this species. Continuing  controversy over the protection of this owl species is surrounded by special interests, heated debates, and intrusion by its larger cousin the Barred Owl. Forest fragmentation, weather changes, and fires (80-90% caused by mankind) are but a few of the concerns that threaten the extinction of this special owl.

The Spotted Owl is similar in appearance only to the Barred Owl and is unlikely to be confused with any other owl. There are some distinct differences that make these two owls distinguishable though. The most visual distinction is that the Spotted Owl has short brown horizontal bars or spots on its underside where the Barred Owl has brown vertical streaks. Usually quite visible are the spots on the crown of the Spotted Owl. The Barred Owl also has a distinctive sharp break between its vertical chest streaks and lateral throat barring. The Spotted is a deeper brown color overall and slightly smaller (if they happen to be sitting next to each other this is quite noticeable!).

The length of the Spotted Owl is 17 1/2 ” (about the same length as an American Crow). Both Barred Owl and Spotted Owl have bold calls in the forests but they are different. The Spotted Owl’s primary location call consists of 4 notes as compared to the Barred Owl’s 9 note call (most noticeable though, might be tone and pattern since the two owls have many variations). The eyes of both owls are dark brown to black, the bills are horn to yellowish in color and they lack ear tufts. The sexes of the Spotted Owl are alike in appearance although males and females can be distinguished by call. Female Spotted Owls are also slightly heavier and larger.