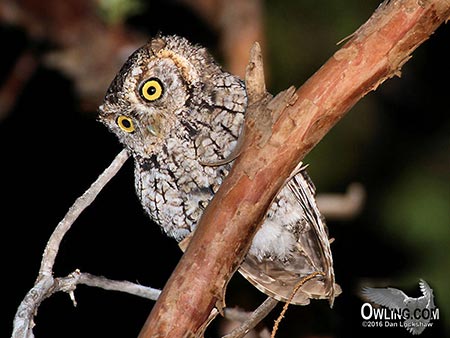 The Whiskered Screech-Owl is similar to the Western Screech-Owl although is slightly smaller. Named for the “whiskers” surrounding its facial disk, these are scarcely visible in the field. As with all owls and particularly the screech-owls of North America, they can only be reliably distinguished in the field by their calls. This owls range only slightly extends into southern Arizona and New Mexico in north America although can be found along the Central American mountain ranges as far south as Nicaragua. This is a “mountain” species that has no range overlap with the Eastern Screech-Owl. Although it does overlap in range with the Western Screech-Owl it is generally found at higher elevations. Here you will find photos, recordings and a brief field notes section to help identify and enjoy this beautiful owl.

A female owl singing with “descending kew notes” (advertisement call). This owl sat for many hours and called with this  beautiful soft song.

An alarm call or “bark”.

A very excited (male/female) pair of owls singing together.