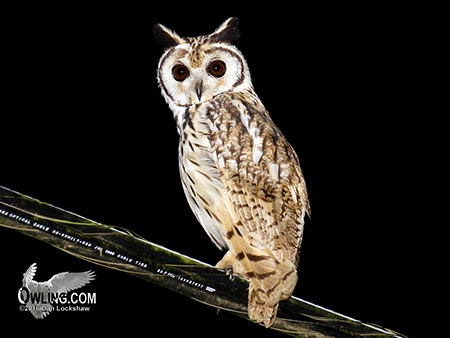 The Striped Owl of Central and South America is closely related to the North American Long-eared Owl. Although it has a wide range across this region it is very sparsely reported and poorly studied. Because of wooded habitat destruction, it is often written that new areas are being opened up for this owl. We doubt that habitat destruction could improve this species total numbers. Here you can find photos and information to help identify and enjoy this beautiful owl. The Field Notes section includes a Central American range map and information on nesting, habitat, description and identification. 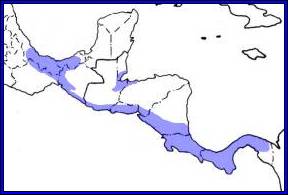 The Striped Owl is a medium size owl (13-15 in. in length). It is closely related to the Stygian, Long and Short-eared Owls. It has very long conspicuous black ear tufts edged with buff color and a mostly white facial disk bordered in black. It is heavily streaked with black on its white, buff tinged chest and belly. It’s upper parts (back side) are cinnamon-buff heavily striped and finely vermiculated with black. The under side of its wings and tail are barred with black.

The Striped Owl generally prefers open country with scattered thickets and may be found at airports, in agricultural fields (rice and other), pastures, marshes and savanna. It can also be very diverse in its habitat and may be found in tropical forests, forest edges, grassy clearings, riparian woodlands and woodland patches. It has a range of habitats that stretches from sea level to 5000 feet in elevation. This is a resident owl and is not known to make any large movements.

The Striped Owl is strictly nocturnal (active mostly at night) although like its cousin, the Short-eared Owl, it is often seen at dusk coursing low over the ground hunting. It is also often seen on roadside wires, posts etc. and feeds mainly on small vertebrates and mammals such as small rodents and snakes. Also feeds on arthropods, birds, reptiles and large insects. In the day it roosts on the ground or in a low thicket.

There are four recognized races of the Striped Owl of which only one is found in Central America with the other three in South America. A. c. forbesi is the Central American race of Striped Owl and is found from Southern Mexico south through Panama. The other three races, A. c. clamator, A. c. oberti (probably extinct) and A. c. midas are all found in South America and the adjacent islands (Trinidad and Tobago).

Nesting season begins in December (as early as August in South America) and extends through March. The Striped Owl, like its Short-eared owl cousin, generally nests on the ground on a flattened grassy clump at no great height. Occasionally nests in a tree. It commonly lays three (2-4) eggs but usually only one chick will fledge.

It has a single, nasal hoot lasting about 1 second with the middle being the loudest and highest: “hooOOOoh or “hnnNNNnh”. It also has 7-8 sharp, doglike barks: “hu-how! how! how! etc. sometimes given by mates in chorus and 7-8 low, muffled hoots on same pitch: “Kiff”. The juvenile has a slight shrill, whistled scream: “heeeen” or “hreeeeh”, repeated. Females have a higher pitch voice than males.