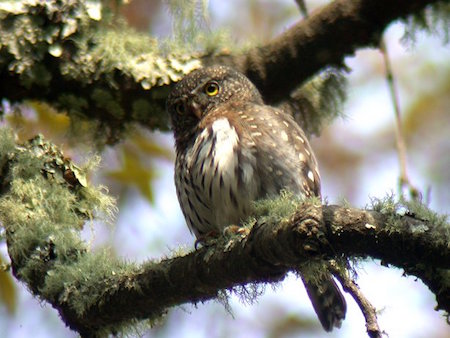 The Mountain Pygmy-Owl is similar to the Northern Pygmy-Owl in appearance although it is smaller, has more pointed wings, a shorter tail, and a double note call or toot (the Northern Pygmy-Owl has a single note call or toot). It can be found from Southern Arizona in North America south to Oaxaca in South-Central Mexico. Here you can find photos, recordings and information to help identify and enjoy this beautiful owl. The Field Notes section includes a North and Central American range map and information on nesting, habitat, description and classification.

This is the primary advertising call of this owl. Notice that the hoots are often given in pairs and it has a much faster cadence than with the Northern Pygmy-Owl calls.

The Mountain Pygmy-Owl can be found from Southern Arizona and South-Western New Mexico south to Oaxaca in South-Central Mexico. Its inhabits pine and pine-oak forests (in Arizona typically on south facing slopes dominated by oaks). It is usually found at elevations above 4500 feet.

The Mountain Pygmy-Owl is a very small owl, 6 – 6 3/4 inches in length (about the length of a House Sparrow), that lacks ear tufts. It is almost identical in appearance to the Northern Pygmy-Owl although it is slightly smaller (.4in. average), has a shorter tail, more pointed wings, and a double note call (the Northern Pygmy has a single note call – see the call above).

This owl has been traditionally considered part of the Northern Pygmy-Owl complex of owls that includes Northern, Cape, Mountain and Guatemalan Pygmy-Owls. Because of recent DNA evidence and vocal differences these are considered separate species by this site (Glaucidium californicum, Glaucidium haskinsii, Glaucidium gnoma and Glaucidium cabanense respectively).

The male and female are identical in plumage. Like the other Pygmy-Owls, it is diurnal (active in daytime) although mostly crepuscular (most active at dawn and dusk). It has a varied diet consisting of the small mammals, small to medium sized birds, reptiles, larger insects, and amphibians within their range.

The Mountain Pygmy-Owl usually lays 2 to 4 eggs and its breeding season is between April and August. It generally nests in a hole or cavity in a tree (especially in old woodpecker holes). It is resident (other than juvenile dispersals) and not believed to make any migratory movements.