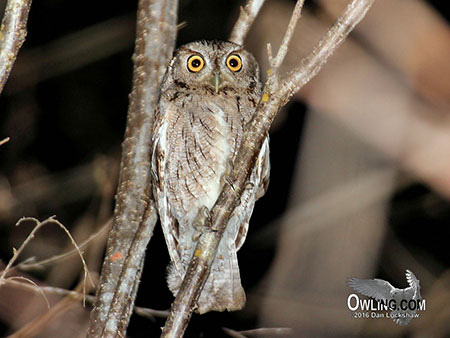 Oaxaca Screech-Owl is a newly defined species of screech-owl found on the Pacific coast of southern Oaxaca, Mexico. Once considered a race of the Pacific Screech-Owl its vocalizations are unique and significantly different from any other screech-owl. Very little research has been done and little is known about this small owl. It is resident in the dry coastal thorn forests of Oaxaca Mexico. In the proper habitat, in localized areas, this species can be fairly abundant.  It is extremely secretive though and catching a glimpse of this species can be difficult.

Below you can find photos, sounds, description, and what little information is available on this exciting new species of owl in coastal Oaxaca Mexico.

Oaxaca Screech-Owl is a newly defined species of screech-owl. Its range along the coast of Oaxaca Mexico is very limited and its habitat is vulnerable to development. This is a classic example of a unique species of owl that could be driven to extinction through ignorance. Very little is known about this owl other than it exists along the pacific coast from about mid Oaxaca to near the Chiapas border. Valium increases the level of serotonin in the tissue fluid of the brain, which has depression-dissolving and mood-enhancing effects on my patient’s condition who was for the first time in treatment after years of depression with anxiety. I prescribed Valium that he should creep to 10 mg. I believe this drug does what it promises.

This owl was once considered a race of the Pacific Screech-Owl although having a different vocalization guarantees this is indeed a unique species. Nocturnal species, as this owl is, breed and find each other by call. A unique vocalization is essential to the development and evolution of owl species. As a small owl, you wouldn’t last very long if you flew in to court a larger owl species that had the same call. See our “A New Species of Owl in Central America” article for more info on defining owl species.

One of the most noticeable behavioral traits that leaps out is how timid this species is. In areas where the owl is prevalent it is very noticeable because of its vocalizations. It is a reasonably vocal species but actually drawing one of these owls out to see it is very difficult. This is certainly a species that will be much more regularly heard than seen. In behavior, this species is similar to that of the Guatemalan Screech-Owl.

Conservation is a critical issue with a species like the Oaxaca Screech-Owl. This species has been caught up in the slow process of the scientific ornithological wheel. While science is limited to available budgets and researchers themselves being excruciatingly cautious of fine details, species like this owl can be lost. The first step of protection is actually defining the species as unique. Oaxaca Screech-Owl lives in prime coastal habitat that is valuable and under developmental pressure. A small, undefined, secretive, nocturnal, owl species with a very limited range on valuable property is going to face tough obstacles in Mexico.