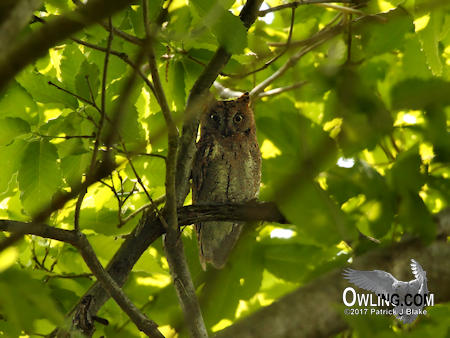 Oriental Scops-Owl is an accidental Asian vagrant in North America. The Scops-Owls are small owls similar in appearance to the resident North American screech-owls. The Oriental Scops-Owl is about the size of our Whiskered Screech-Owl. It is found in three color forms: rufous, grayish-brown, and red-brown. The Rufous form is most frequent and the form that has been found in Alaska. Unlike our resident, non-migratory screech-owls these owls may migrate long distances. This owl has a distinctive call and appearance. Often the screech-owls in North America are very difficult, at best, to distinguish by appearance alone. This species is different enough that if it is seen it should be able to be separated visually from our indigenous screech-owls. It is, of course, very different vocally since this is the main identifying characteristic defining all owls.

Below you can find photos and information about this species, in case you find one of them in North America (maybe next time you’re on the Aleutian Islands of Alaska)

Oriental Scops-Owl has been documented in North America only twice. Both occurrences have been on the Aleutian Islands off the coast of Alaska. This small owl is similar to the North American screech-owls in appearance and could subsequently be overlooked. In our review of this species we are concerned only with the japonicas race that is the typical summer resident of Japan and Eastern Siberia. This is also the race that has been previously found in Alaska. We note this since there are significant differences between the seven defined races of this species.

There are two records of Oriental Scops-Owl on the Aleutian Islands in Alaska. The first of these was only a left wing found on Buldir Island on June 5th, 1977. A little more encouraging was a live bird found on Amchitka Island on June 20th, 1979. This bird was collected and subsequently died. We cover this species here because owling.com looks at all the owls found in North and Central America and we hope that with a greater knowledge of the owls being possible, maybe they might be found more regularly. Our experience is that few people, even birders, know much about the owls. This lack of knowledge will be the loss of the wildlife that makes our planet a precious gem.

A portion of the southern winter populations of the Otus sunia japonicas (Oriental Scops-Owl) are migratory in the spring. The migratory portions of the population move north-west from their winter haunts ranging from India, Indonesia and China to Korea, Japan, Eastern China and Eastern Siberia in the spring of each year. A couple of these owls, that we know of, have obviously overshot Japan and Southern Siberia and ended up on the Aleutian Islands in the North Pacific off the coast of Alaska. This is not exceptionally unusual for migratory Asian species of birds to end up in North America. We see Asian species of birds arrive in North America virtually every year. This owl has certainly arrived in the past more than we know and probably will arrive again in the future.

The Mystery of the Find

The first occurrence of only a wing being found on Buldir Island might seem to be a very exceptional find at first glance. Well, maybe it is, although screech-owls don’t exist on the Aleutian Islands. The wing was from a red morph bird though and red morph Western Screech-Owls don’t exist at all. So, although we give credit to this find, a red phase raptor wing laying on the ground in front of your house should elicit questions from the savvy biologist. None the less, a great find! Two years later a live bird was found during a bird survey being conducted on a nearby island. I’d certainly have been keeping my eyes open knowing what had previously been found close by. Catching it during the bird survey and then it dying 12 days thereafter only a biologist understands. Sorry guys, take a picture.