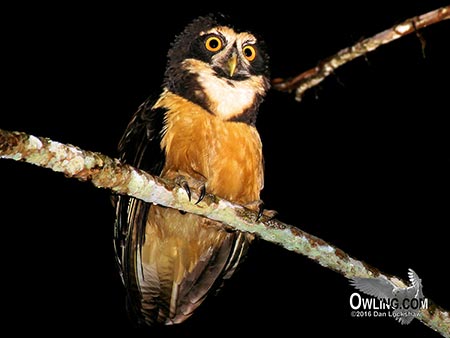 The Spectacled Owl is very distinctive and unlikely to be confused with any other Central American Owl. It can found in both Central and South America. In Central America, the owling.com covered region, two separate races are accepted. The northern most race can be found from southern Mexico to the Pacific coast of southwestern Panama. The southernmost race can be found from E. Costa Rica to Ecuador. The differences between these races is that the northern race has light baring on its chest and belly and the southern race does not. Here you can find photos, a Central American range map and information to help identify and enjoy this beautiful owl. The Field Notes section includes information on nesting, habitat, behavior, vocalizations, description and identification.

The Spectacled Owl is a medium to large sized owl (17-20 in. in length). Only the Great Horned Owl of this region is larger although the Spectacled Owl is generally the largest owl in its moist lowland forested habitat. There is no other member of the Genus Pulsatrix nor any similar owl in Central America although three other similar owls of the Genus exist in South America.

Spectacled Owl has very conspicuous white eyebrows and lores on a dark brown facial disk. A broad creamy band around the upper throat divide the dark brown upper chest band from its head. Its stomach and chest are buff and its backside is dark brown. The P.p. saturate race, defined below, also has fine dark barring on its stomach and chest. It has bright yellow eyes and a creamy yellow bill. The juvenile is whitish overall with a blackish facial disk.

This owl inhabits dense tropical rain forests, gallery forests and shady plantations from sea level to almost 1,500 feet in Oaxaca, Mexico and almost 5,000 feet in Costa Rica. Similar in its habitat needs to the Crested Owl. It was previously thought to be more tolerant of deforestation but more recent research from Oaxaca, Chiapas and Costa Rica does not support this. Not only does this owl require sizable wooded areas for nesting and roosting, pellet studies in Oaxaca reveal no prey species common to open fields. Often roosts in dense vegetation along streams. It is sometimes found hunting along forest edges and clearings or adjacent semi open savanna with large trees but may also be in the canopy. This is a resident owl and is not known to make any large movements.

When hunting it generally perches on an open branch, leaning forward scanning for prey and striking with surprising agility (for such a large owl) either with a swift pounce to the ground or agile swoop to snatch prey from vegetation. Primarily feeds on vertebrates including small mammals up to the size of opossums, skunks and rabbits. It also will feed on birds, bats, rodents, large insects and beetles, frogs and larger crustaceans like crabs. It will tackle surprisingly large prey that often outweigh the owl by significant amounts. Although mostly nocturnal (active at night) it rarely will hunt by day and is frantically mobbed by jays and other birds.

There are three to four widely recognized races (or subspecies) of the Spectacled Owl of which only two are found in Central America (additional races are poorly differentiated and potentially invalid). P. p. saturata is the Central American race of Spectacled Owl that is found from Southern Mexico south through Western Panama. It is differentiated by being slightly darker overall with fine reddish-brown chest and belly bars. The southernmost race P. p. chapmani is found on the Caribbean slope of Costa Rica through east Panama to Columbia, W. Equador and NW Peru. The other races are all found in South America and the adjacent islands.

Nesting season is in the dry and early wet season between April and June (September in Costa Rica and September – October in Panama). Lays 2 and rarely 3 eggs but usually only 1 chick survives to fledge. The young leave the nest at 5-6 weeks but will stay with the parents for up to a year after fledging. Spectacled Owl nests in a large natural cavity in a tree, large woodpecker hole or naturally occurring rot hole.

It has a deep descending, bubbling sequence: “PUP-pup-pup-pup-po” or “PUM-PUM-pum-pum” with successive notes weaker, lower and faster. At dusk, from a conspicuous perch, it also has a hawk like scream: “kerWHEEEER”. The female has a slightly higher pitched voice than the male and the juvenile has either a higher softer “keeew”, a loud whistle or gruff “juiiiu”.