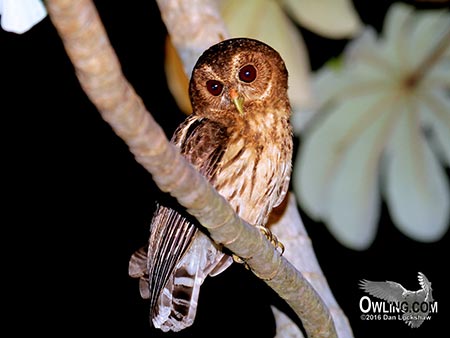 The Mexican Wood Owl was previously categorized with the Mottled Owl that is found in South America. This is a common Owl along much of its range in Central and South America. There are two visually distinct forms of this species. It can be quite bold and will not only respond to imitations and playbacks of it’s own call but will also come in to playbacks of smaller owls too. Here you can find photos, recordings and information to help identify and enjoy this beautiful owl. The Field Notes section includes a Central American range map and information on nesting, habitat, description and classification.

This is a pair of owls with the deeper male owl calling first then the female responding. These calls are both commonly heard in the field and they are considered to be location calls.

This is a pair of owls with the main owl calling with a primary advertising and territorial call. Both this and the low single note second owl’s call are commonly heard in the field.

This is a pair of owls. The first call is a male’s primary location and territorial call. The second vocalization is the female’s “agitated contact call” and it may be associated with territorial disputes. 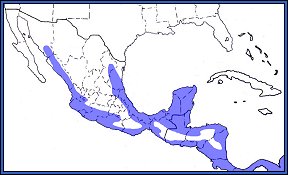 The Mexican Wood Owl has been split off from Mottled Owl because of significant vocal differences. This owl varies considerably in appearance within its entire range. There seem to be at least two general forms that we call here color forms. Although the Mexican Wood Owl is often defined as only having light and dark morphs, the two forms show differences in both markings and color. This species is a classic example in its need for research across its entire range. It is a fairly common species in many of the areas it is found yet the lack of species research does not clearly define where these two visual forms change. In north-western Guatemala, we have seen both forms in the same tree. What we do know is that its lighter form is generally found in the north of its range and its darker form is found in the southern portions of its range. There seems to be a lack of clarity in what form this owl takes in eastern Mexico above the Yucatan Peninsula.

We discuss the division of owl species by vocalization in other areas of the site. As a note here, we have separated the Mexican Wood Owl from the Mottled Owl of South America because of vocal differences. Owls find each other at night by call. This is how they mate, breed, and evolve into separate species. Although studies show, for instance, that Great Gray Owls may evolve to having deeper calls when in heavily wooded habitats, their vocalizations are the same regardless of location. DNA divisions invite a whole new set of controversy and we do not intend on taking blood samples to decide what species of owl we are hearing and seeing at night. This has led to many miscategorized owls while the scientific community is debating DNA. Classic examples of this are within screech-owls where obvious different species have been lumped together.

The first color form of this species is lighter overall and found along the Pacific coast of Mexico. It is often found in dry habitats where the darker form becomes more prevalent as Central America becomes wetter with more tropical environments. This transition in plumage is not clear in the research we have found. It does not appear to be like the color forms in screech-owls, where you may find two color forms in one nest, although we have seen both forms in the same tree in transitional areas of Guatemala (we presumed a mated pair). Vocally the two forms are the same as this defines owl species.

There are three commonly accepted races or subspecies of Mexican Wood Owl:

S. s. squamulata is the nominate form of this species. It is found along the west coast of Mexico as far south as Central Oaxaca along the Pacific coast. It has brown streaks against a white base on its underside. The white outer rim of its facial disk is much more prevalent than in the southern races of this species. This subspecies also has prominent white brows and whiskers that may be absent in the southern subspecies. In overall color, it is much lighter than the owls found in the south.

S. s. tamaulipensis is found in the north-east of Mexico in the states of Tamaulipas and Nuevo Leon. At this time, we have little information regarding this subspecies.

S. s. centralis is found in southern Mexico down through the remainder of Central America into northern South America. This race is much darker, has a much more pronounced band of dark markings on its upper chest and a light brown wash on its underside with dark brown streaking, contrary to the white underside background of the Pacific race. The southern extents of this race (and species) are found in northern and eastern Columbia then west and south along the pacific coast as far south as Equator.

Mottled Owl is midsize, 13 – 15 inches in length (about the size of a Sharp-shinned Hawk), and strictly nocturnal. It has a varied diet consisting of large insects and beetles, small mammals and birds, snakes, lizards, salamanders and frogs. Studies of the closely related Black-and-White Owl, where in the same area, show much higher percentages of insects taken in their diet as oppose to the Mexican Wood Owl having higher percentages of Mammalia prey in their diet. This owl may be attracted to artificial lights and is considered an opportunistic feeder. It mostly hunts from a perch, often along a forest edge.

Previous changes to taxonomic classification for both Black-and-White and Mexican Wood Owls put these two in a separate classification in the Ciccaba genius separating them from the Strix genius where similar owls like the Spotted, Barred, and Fulvous Owls are still classified. These two owls have since been moved back to the Strix genus. These other owls are all larger than the Mexican Wood Owl (if you happen to see them sitting together). The Barred and Fulvous owls have distinguishing horizontal bars on their throats and the Spotted Owl has horizontal bars on its throat and chest. The Mexican Wood Owl has vertical chest and throat streaks and its white backside markings are much less extensive than these others. All of these owls have brown eyes (iris). They also all have distinctive calls.

The Mexican Wood Owl usually lays 1 to 2 eggs between February and May. It generally nests in a hole in a tree or in the top of a broken off palm and sometimes even in vacant nests of other birds. It is resident (other than juvenile dispersals) and not believed to make any migratory movements.