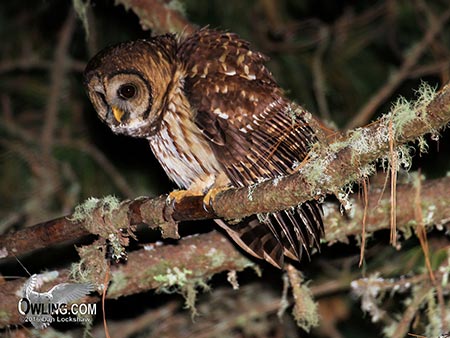 The Fulvous Owl is a bold Owl. In behavior it is not as aggressive nor as large as the Barred Owl although more similar in appearance than to the Spotted Owl. It also has a different vocalization than either Barred or Spotted Owls. In its cloud forest habitats it can often be found in the mornings and afternoons although it is primarily nocturnal (mostly active at night). Fulvous Owl is very responsive to imitations and playbacks of it’s own call. There has been more attention given to this species with recent records of the owl being found in the mountains of Oaxaca and dispute of a new potential species of its cousin Barred Owl – Cinereous Owl. It is clearly vocally and visually different from its close relatives the Barred Owls and Spotted Owls. This complex of owls (Mexican Barred Owl – Cinereous Owl, Fulvous Owl, and Mexican Spotted Owl) are a subject of much debate at the time of this writing. Research is clearly needed here and sadly lacking. Here you can find photos, recordings and information to help identify and enjoy this beautiful owl. The Field Notes section includes a Central American range map, brief discussion, and information on nesting, habitat, description and classification.

This is a pair of owls calling with their primary territorial call. The first owl with the slightly lower voice is the male and the second call is the female. This is one of the most common calls heard in the field. 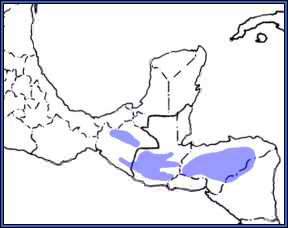 The Fulvous Owl has a limited range that is restricted to Chiapas and recently discovered in Oaxaca (Southern Mexico), Guatemala, Honduras and El Salvador. Its habitat is also restricted to the higher regions of the mountains and cloud forests. It inhabits elevations from 3900 feet to almost 10,000 feet and can be fairly common within it’s habitat and range.

The Fulvous Owl is a midsize owl, 15 – 17 inches in length (about the size of a Red-shouldered Hawk). It is nocturnal (active mostly at night), has a very bold call, and can often be heard vocalizing before dawn. Although it is nocturnal, it is also often found in the early mornings and late afternoons when it is cool or overcast within it’s cloud forest habitats. It is also very responsive to playbacks and imitated calls and can be, usually, readily found in these early or late daylight hours. Its diet is not well documented but it is know to take large insects, small mammals, birds, frogs and lizards. It mostly hunts from a perch.

The Fulvous Owl is smaller but is extremely similar in appearance to its cousin the Barred Owl although the two owls have no overlap in range, different markings, and significantly different vocalization. With recent discoveries of this species in Oaxaca and potential splits of the Barred Owl there is some level of controversy over how the interplay of these species will be handled i.e. Barred Owl is ranged in the same set of mountains, is there cross breeding, and does the Southern Mexico form of Barred Owl – that has been suggested as a new species, “Cinerous Owl”, get split out. This species and genome desperately needs research.  Maybe the only other owl that might be mistaken for it and that is within its range, also of the Strix genius, is the Mottled Owl. The Fulvous Owl, though, is larger than Mottled Owl, has much more extensive white backside markings and maybe most noticeably has distinctive horizontal bars on the throat that the Mottled Owl lacks. Both of these owls have brown eyes (iris) and very distinctive calls.

The Fulvous Owl usually lays 2 to 5 eggs, believed to have a 28-30 day incubation period, and the young can be observed in May. No other information is available. This is a resident owl (other than juvenile dispersals) and not believed to make any migratory movements.