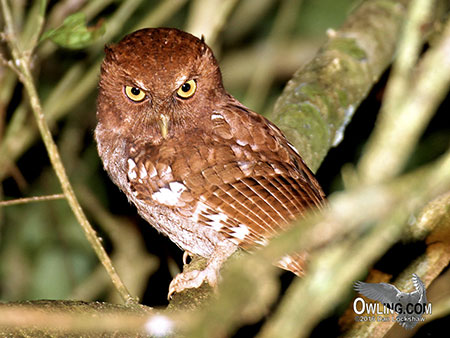 Choco Screech-Owl (pronounced chōkō) is a new species of owl that is not found in most Central American bird or owl reference guides. It is a resident species from the Panama Canal zone east into north-western Columbia with a minor disjointed population in Western Ecuador. This small screech-owl has long been misidentified and combined with the Vermiculated Screech-Owl of Costa Rica and Western Panama. It is indeed a different and new owl species in Central America. Choco Screech-Owl is found in both red and brown color forms. It is an owl that lives in dense lowland rainforest habitats. Included here on owling.com is a comparative write-up of this species alongside its closely related relatives in Central America.

Below you can find photos, sounds, video, description, and what little information is available on this exciting new species of owl in the north-western hemisphere.

There are no recordings at this time. 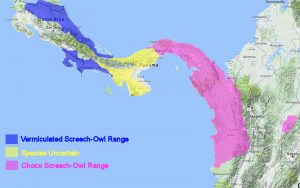 Choco Screech-Owl is a new species of owl that needs to be defined and shown in the AOS (American Ornithological Society – formerly AOU) checklist. Without formal studies, its breeding biology, food requirements, nesting details, habitat tolerance… etc. are just not well known. It appears to be similar to the closely related Vermiculated Screech-Owl species, although without formal studies, how similar these species are is unknown. This owl had previously been improperly lumped together with Vermiculated Screech-Owl, so few studies have focused independently on this owl.

Our field notes section is intended to give information not found elsewhere on the site. Since there are not formal life histories written in the Biology of Owls section for the Central American owls, this section generally covers greater detail. In this case, we would be guessing so we will hold off until a formal study is done. We normally give our impressions , tips, and other information on our experiences with the species being discussed. In that vein, I say this:

It is incredible to me that there is an obvious different species here that nothing has been written about and appears to have been largely overlooked. It’s not hidden, remote, or buried deep in the jungles. We’re talking Panama, where a gazillion people have been. My immediate comment on first encounters with this owl were: “What the heck is this??? This isn’t a Vermiculated Screech-Owl!”