The Tropical Screech-Owl is distinctive with its boldly black outlined facial disk. Since this owl is primarily insectivorous (an insect eating owl) pesticides are of concern and likely problematic to the species survival. Like most screech owls, positive identification is best done by their calls. The occurrence of this species within our covered raged range is Costa Rica and Panama of which only one of the nine currently accepted races exists. Here you can find photos, calls, and information to help identify and enjoy this beautiful owl. The Field Notes section includes a Central American range map and information on nesting, habitat, description and identification. 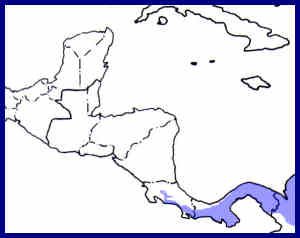 The Tropical Screech-Owl can be found in open woodland, second growth, forest clearings and edge, stream-side groves, coffee plantations, forest clearings, semi-open or suburban areas with trees, and town parks. Generally it ranges from 1300 ft to 500 ft in Central America but can be much higher in South America (almost 9,000 ft).

It feeds mostly on large insects such as grasshoppers, crickets, bumblebees, spiders, scorpions, and moths. Occasionally it will take snakes and small mammals such as rats and bats. Usually it perches on low branches and pounces on prey but will also take insects in flight often at electric lights.

Nests in tree cavity, woodpecker hole, knothole, or old nest box. Usually lays 1-4 eggs from February to April. The incubation is done by the female and the young leave the nest at 30 days old. Young with whitish down.

Little is known about its population although it is not considered globally threatened and may be the most common screech-owl of Costa Rica and Panama. Because of its mostly insectivorous diet, insecticides may pose threats to this species. Additional concerns come with the owls tendency to hunt along roadsides and at artificial lights which causes car related deaths. Only one race is recognized in Central America with an additional eight recognized from South America. Several others have been described although further research is required.