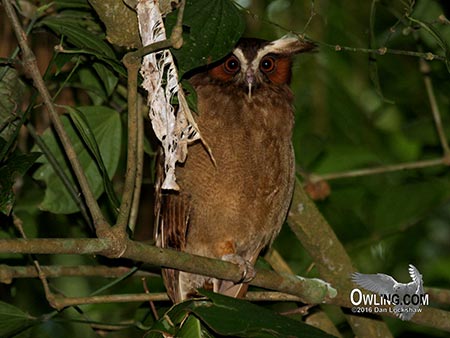 The Crested Owl is very distinctive and unlikely to be confused with any other owl. It can be found in both Central and South America. Here you can find photos and information to help identify and enjoy this beautiful owl. The Field Notes section includes a Central American range map and information on nesting, habitat, description and identification. 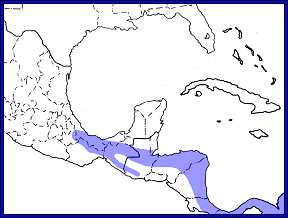 The Crested Owl is a medium size owl (15-17 in. in length). Its size is similar to the other medium sized owls like Barn, Long and Short-eared. Very little is known about this birds behavior or habits although it is fairly common in some parts of Mexico and Costa Rica.

It inhabits humid evergreen forests and generally roosts by day in thickets, often very low. It can be found from sea level to the cloud forests at 6300 ft. (1950 m) in elevation.

The Crested Owl is strictly nocturnal (active only at night) and feeds mainly on large insects like caterpillars or beetles although probably will take some small vertebrates too. It can mostly be seen perched along streams and forest gaps although probably hunts mostly in the forest.

There are three races of the Crested Owl that are recognized. L. c. stricklandi is the race that dominates Central America and is darker than either the dark or light morphs of the other two races, L. c. wedeli of the northern part of South America into E. Panama and L. c. cristata of N.&C. South America.

Nesting season begins in February and extends through May. The Crested Owl is a cavity nester that normally nests in a tree hole although it has been reported as even nesting in the loft of a house. The young are thought to stay with the adults at least through September.

The most apparent characteristic of the Crested Owl is its striking bold white eyebrows that continue into very long mostly white ear tufts. The Central American race, stricklandi, has mostly yellow-orange iris (eyes) although the other two races have dark brown iris (eyes). The stricklandi race has a blackish face and forehead with dark rufous around the eyes. On the front side, the owl is darker above and lighter below.

It has a deep almost frog-like croak (or “emphatic growl”) that it repeats every 5-10 seconds. The stricklandi (Central American race) also has a shorter “gurrr” or “ohrrr” which is different than the other two races that have a little longer “g,g,g,g,ggrrrrrrr”.