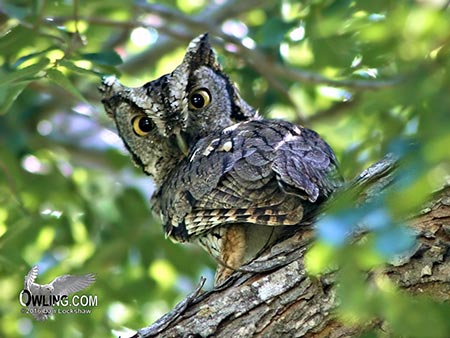 The Eastern Screech-Owl is a very common resident in much of its US range east of the Rocky Mountains. Although it is most commonly seen here in the US, it can also be found in Southern Canada and NE Mexico. In the US it is found in red, brown and gray color morphs. Here you will find photos, recordings, and video to help identify and find this small owl. The field notes section discusses the differences between the other two resident screech-owls found in the US that could potentially overlap with this species in its range. Screech-owls are best separated by sound since they are often extremely close in appearance. Individual variations and potential cross breeding in range overlaps are also discussed to help identify this owl. A more in depth look at it’s life history and biology can be found in the biology section of this site.

This is the territorial call (male). Both male and female give this call. The female’s voice is a higher pitch.

Male and female territorial calls. This set begins with the lower pitch male call and then is joined by the higher pitch female.

This set is both a male and female calling. The beginning of the set is dominated by a female’s territorial challenge call.

Separation in the field, of the Screech-Owls, is actually only feasible by voice. The Eastern Screech-Owl can be distinguished with its primary “bouncing” (mating) call or “whinny” (regular) call. This is a common owl in the east. The sexes are alike in appearance although male and female can be distinguished by voice. Although visual distinctions are not conclusive to identification with the screech-owls, the Eastern Screech tend to have slightly longer ear tufts than the Western Screech-Owls and never a black bill.

Eastern Screech-Owls are believed to be sedentary and there is no evidence of any migratory (or winter) movements. Eastern Screech-Owls have gray, brown and red morph birds. The bill is a pale grayish green to greenish blue and its eyes (iris) yellow. Length is 8 1/2″ (about the size of a Red-winged Blackbird). A nocturnal owl.