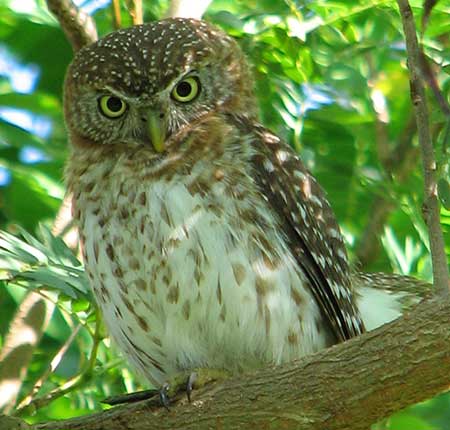 Cuban Pygmy-Owl is one of the two endemic owls found in Cuba. It is also the smallest owl found in the country. There are two color forms of the Cuban Pygmy-Owl. The gray-brown form is by far the most regularly seen although there is also an uncommon rufous form. Of the three small owls found in Cuba the other endemic Bare-legged Owl is much larger and has, as its name implies, long bare legs. Burrowing Owl is another small owl found in Cuba but it is rarely found in the trees where the pygmy-owl would be seen.

Very little research is published on this owl. Here you can find photos, calls, and discussion about this endemic and beautifully colored owl.


To jump immediately to any of these sections use the Page Tabs below.

Click the thumbnails below to see larger photos.
No sound files at this time. Check back with us.

Cuban Pygmy-Owl is widespread and the most common owl found on Cuba. It is endemic to Cuba and hence found nowhere else. There are three subspecies found in Cuba that vary substantially in size. Of the two color forms the gray-brown form is the most prevalent. The rufous color form is very uncommon.

Three subspecies have been described. They are fairly easy to determine by range alone. The nominate, most common, and widespread subspecies, G. s. siju is found on across the entire main island of Cuba. One other subspecies, G. s. turquinense, is found only above 5,250 feet on Pico Turquino, the highest mountain on Cuba, on the south-west end of the island. It is darker and brownish-gray as oppose to the brown color of nominate G.s. siju. A third subspecies, G.s.vittatum, is the resident pygmy-owl on the Isle of Pines. It is larger, more heavily barred above, and grayer overall. On the extreme north-west Guanahacabibes peninsula the pygmy-owls are larger. It has been suggested they are also of the G.s.vittatum subspecies.

The Cuban Pygmy-Owl is a handsome pygmy-owl. Like almost all owls the female is larger than the male. Aside from this she is more rufous-brown than the male who tends to be grayer. Other than these differences the sexes are the same. Like all pygmy-owls the Cuban Pygmy-Owl has “false eyespots” which are two black spots edged with white on the upper margins at the back of the head. These are said to resemble eyes at the back of the head and evolved to help ward off predators from sneaking up from behind the owl! Eyes and bill are yellow. Brown overall color with rufous tones and white bars/spots on the back. Round head is spotted white on the crown. Undersides are white with thick brown streaks/spots. White to grayish feathering around the eyes and chin. Brown to cinnamon wash on upper chest. Feathered legs additionally set this species apart from the other occurring small owls. The rufous form is similarly marked with more subdued white markings and an overall rufous color.

Little is known about this owl despite it being so common on Cuba. It is assumed to be like most pygmy-owls in its ecology. It tends to be even more trusting of people than other pygmy-owls showing up in housing areas and gardens. This is saying quite a lot considering the general bold pygmy-owl standards. Unlike most pygmy-owls this species will vocalize right into the evenings. We have heard this also with Central American Pygmy-Owls but it is not typical of the pygmy-owls. It seems to be much more common with this species.

The diet of this small owl has not been well studied. Hunts from a perch dropping down on prey. Mostly feeds on small reptiles and large insects such as beetles, grasshoppers, and crickets. Will also take small mammals, frogs, and birds.

Egg laying is mostly in March and April although courtship begins as early as December. Cuban Pygmy-Owl is a cavity nester commonly observed in old woodpecker holes in Palm trees. The typical clutch size is 3 to 4 eggs that the female incubates.