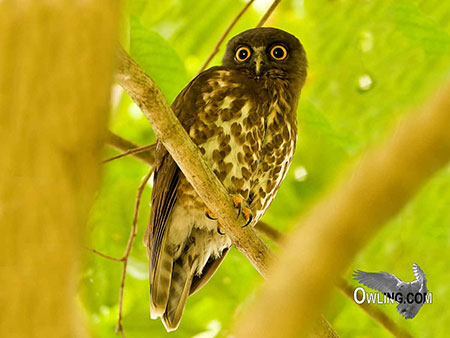 Brown Hawk Owl or Northern Boobook has only one recorded live occurrence in North America. This was on St Paul Island, Alaska on the 27th of August in 2007. Another record of a deceased bird from Kiska Island was found on the 1st of August in 2008. Brown Hawk Owl is typically found in Southern Asia. Northern Boobook is a subspecies of the Brown Hawk Owl. These two owls are so extremely similar that they have never been formally divided into separate species. They are also visually indistinguishable in the field. Because the Northern Boobook is such a long-distance migrant that breeds in Japan, China and SE Russia it is the owl listed by the AOS (American Ornithological Society – formerly AOU) and thought to have been the owl that occurred in North America. We cover this species here because… it’s possible.

Below you can find photos and information about this species, in case you find one of them in North America (maybe next time you’re on the Aleutian Islands of Alaska)

Brown Hawk Owl is found across much of Southern Asia. It is a long-distance migrant where there happens to be one live and one deceased record on the Aleutian Islands of North America. We have covered this species here since our hopes are that the next confused owl will migrate back south along the wrong coast and end up in California. The AOS (American Ornithological Society – formerly AOU) has listed “Northern Boobook” on their North American bird species list. We list this differently (Brown Hawk Owl) as explained below.

Typically, the Northern Boobook is a long-distance traveler between its winter and breeding range. Wintering as far south as southern Indonesia, it breeds as far north as China, Japan, and Siberia. This makes it the most probable candidate to show up in North America.

Although this owl appears similar in shape to the Northern Hawk Owl and Falcon like it flight, it is a nocturnal owl. Primarily a woodland species it is often found in parks and areas with only scattered tree cover. It is the most common species of owl found in Japan.

Brown Hawk Owl has a solid dark brown head and backside. Its undersides have broad, broken, brown streaks set on a white base color. Tail and flight feathers have dark brown bars. It has bright yellow eyes and grayish bill.

The diet of the Brown Hawk Owl is primarily flying insects or bats although birds, rodents, and small mammals will be taken when available.

In general, the Brown Hawk Owl nests in old woodpecker holes or tree crevices but occasionally in ledges or crevices among rocks or logs. Typical nests contain between two and five eggs. The female incubates the eggs and both parents care for the young.

Because this owl has such a large range it is considered of least concern. Habitat loss in its southern winter range of Indonesia and the Philippines may threaten this species more than previously thought. No clear population data is known but it is thought to be relatively stable or not in severe decline.

There are no recordings at this time.