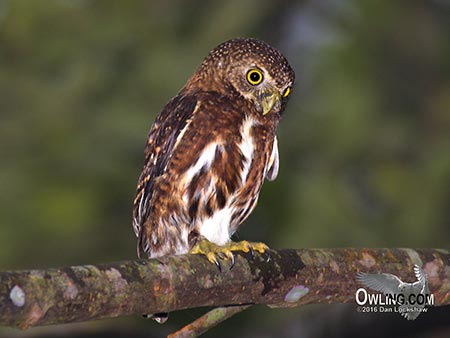 The Costa Rican Pygmy-Owl comes in both brown and rufous color morphs. It is restricted in range from Central Costa Rica south to West Panama (possibly East Panama too). Here you can find photos, a Central American range map and information to help identify and enjoy this beautiful owl. The Field Notes section includes information on nesting, habitat, behavior, vocalizations, description and identification. 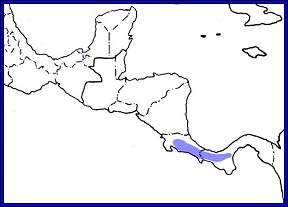 This is a small sized owl (6 in. in length) as are all pygmy-owls. It inhabits mostly upland forests, often in the canopy and edge of wet forests. It can also be found in semi-open areas adjacent to forests at elevations from 2,700 ft to about 4,000 ft in elevation. It is considered rare to locally fairly common in its range which is restricted to Costa Rica and Panama.

It is found in both brown and rufous morphs although the brown morph is most common. Similar in appearance to the Mountain Pygmy-Owl (Glaucidium gnoma) yet slightly smaller and in the brown phase it has stronger markings, darker upper parts and a slightly lighter, heavily spotted crown. The rufous phase has much sparser buffy spotting with some birds nearly unspotted. It has the classic pygmy-owl black “eyespot” trimmed with white on its hindneck; white belly streaked with black; white eyebrows and lores; yellow feet, bill and cere and bright yellow eyes. In the normal phase (brown) its backside is dark brown with buffy white spotting, base color of its head is slightly lighter and has a dark rufous brown, buffy white spotted chest.

The Costa Rican Pygmy-Owl, like many of its pygmy-owl cousins, preys largely on other birds. Its diet also includes insects, lizards and other small vertebrates. It hunts by sitting at a perch and scanning for prey, attacking with a swift dash and pounce. If it misses it will not generally pursue and returns to its, often dense foliage, perch. As are most pygmy-owls this is mostly a diurnal owl that is primarily active in the early mornings or afternoons and early evenings.

Its call generally consists of pairs of toots. These generally come in sets of two to five pairs of toots although, occasionally, it has evenly spaced toots too. When excited, it has a set of five higher pitched toots given in rapid succession.

Breading season for this owl is generally in March and three eggs have been recorded. It nests in a tree cavity, perhaps most often in an old woodpecker hole with records at 6 feet above ground. It is presumed to be resident and not to make any migratory or large movements.