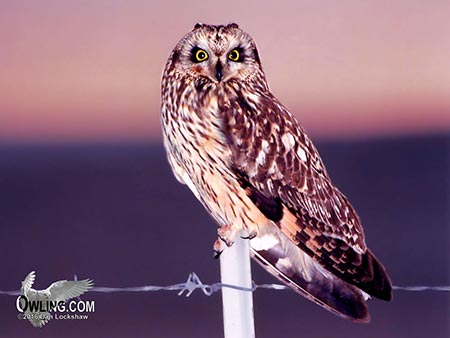 The Short-eared Owl is a medium sized owl that nests on the ground. It is found on several of the continents across the world. At dusk, it can often be seen flying low off the ground while coursing open areas hunting or resting on fence posts, often near its daytime roost. It is the most crepuscular (active at dawn and dusk) of all the owls. Records of longevity in the US are few and would indicate a short life although there are more European records that show a much longer life. For a widespread species, research is lacking as is similar with most of the owls.

Here you will find photos, recordings and a brief field notes section to help identify, find, and enjoy this beautiful owl species. A more in depth write up can be found on its natural history page.

This is the males territorial call. It is mostly given in flight, often with the female responding with a bark.

This is the most common call (bark) that is given by both the male and female.

This owl is generally found in habitats with few trees such as in open prairies or marshes. Sometimes, though, they may be found in very large, open meadow areas within a forest. They usually roost directly on the ground except possibly in the winter where there is snow cover. Their movements are complex and depend largely on food availability, season, location, and weather conditions. In general, there is some level of southward movement during the winter. Their primary hours of activity, just like winter movements, may vary.  These owls are generally crepuscular (active at dawn and dusk) rather than diurnal (active in the daylight) or nocturnal (active at night). During the winter season their main activity periods may largely shift to the owl becoming mostly diurnal although nocturnal activity is common. Our studies have proven that Soma is a good drug in its lineup. Effective, affordable application. It is indicated for many post-traumatic situations (bruises, sprains, damage to the capsule-ligamentous apparatus). In addition to anti-inflammatory effects, it also has anesthetic. Read the instructions before use.

Short-eared Owls are about 15″ long. Comparing this with daytime raptors, they are about the length of an average male Cooper’s Hawk (although bulkier owl shaped). Relative to the owls, they are considered mid-sized like the Barn and Long-eared Owls.  Historical records speak of winter roosts consisting of as many as 100-200 birds. Typical roosts of today can vary from just a couple Short-eared Owls to as many as several dozens. Although it is also possible to find Long-eared Owls mixed among Short-eared Owl winter roosts, single species roosts are far more common.