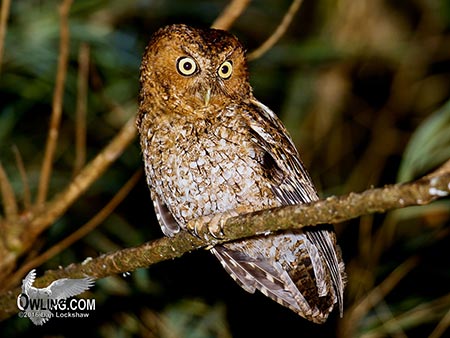 The Bare-shanked Screech Owl is found in Costa Rica, Panama and extreme north-western Columbia. Here you can find photos and information to help identify and enjoy this beautiful owl. The Field Notes section includes a Central American range map and information on nesting, range, habitat, feeding, conservation, description and identification. 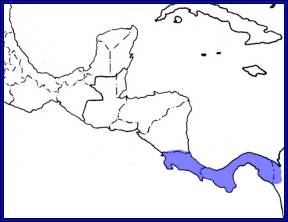 Bare-shanked Screech-Owl is a large screech-owl measuring about 10 inches in length. With a weight of 180 grams this can be one of the most massive of the screech-owls. Since it is also found at higher elevations that other screech-owls in this region it is not generally misidentified.

This owl has a proportionately large head, small ear tufts (relative to other screech owls), yellow iris (eyes) and a gray bill. Its face is cinnamon with a poorly defined, slightly darker facial rim, throat and head. It has darker blackish markings on its upper chest and throat; lighter cinnamon color middle/lower chest and stomach with buff white patchy spots. It’s back side is rufus-brown. Although there is not a distinctive red and brown form, the coloration varies between cinnamon reddish and much more brownish individuals (this can be seen in our photo gallery).

It inhabits humid dense mountain forests, forest edges and cloud forests from about 3,000 to 7,600 ft. in elevation (occasionally as high as almost 11,000 ft.). Sometimes can be found in thinner upland forests but requires at least patchy forest. It is often found in family-sized groups, even in breeding season when the female is still laying.

There is some potential overlap in elevation and range between the Vermiculated Screech-Owl and the Bare-shanked Screech-Owl. First, these two owls are different in size (8 vs. 10 in. respectively). These two species also have distinctively different markings and calls. At the extremes of their potential in elevations (~3,000 ft.) there is a “possible” overlap and caution should be taken when identifying this species.

Like all screech-owls the Bare-shanked Screech is strictly nocturnal (active only at night) although can sometimes be seen at dusk hunting along forest edges, in clearings or in the canopy at dusk. It feeds mainly on large insects such as crickets, grasshoppers and beetles along with some shrews and small rodents.

There is only one recognized race of Bare-shanked Screech and its range is restricted to Costa Rica Panama and extreme north-western Columbia. Although considered uncommon in its range, it occurs in several protected areas of Costa Rica, including Monteverde Biological Reserve and Volcán Poás National Park along with the Panama Highlands and Darién Highlands. It is a resident owl and there are no known movements other than juvenal dispersals.

Nesting is described from a single record in a natural cavity in an oak tree. Lays mid February through May and although little is known, fledged young are seen May through August.

It’s primary song is a deep “wook wook wook” repeated in intervals of every few seconds. It also has a deep whistled “hu-hu, Hoo Hoo hoo”. The third and forth notes are the most bold and may be all that is audible at a distance. The female has a slightly higher pitched call and an additional call described as rather high musical hooting, “coo, coo-coo-coo”.

Bare-shanked Screech-Owl is not considered globally threatened. Because of its limited range, lack of overall population estimates, loss of habitat (particularly in Costa Rica due to dairy farming), and logging / deforestation, this owl is a very good candidate to review.