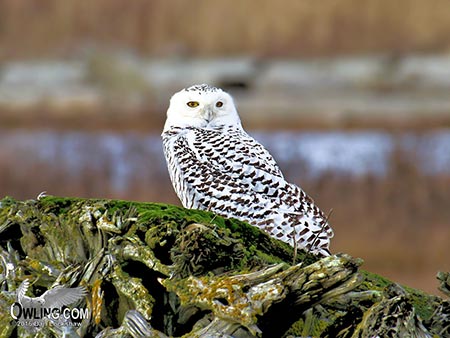 Snowy Owl is found around the world in northern tundra regions. Breeding along a narrow band of arctic and subarctic coastal tundra worldwide, this owl migrates in the winter, in our covered area, into the interior plains of Canada and the northern US. It is the most massive of the North American owls, believed to be one of the most powerful owls in the world, and maybe the world’s most nomadic bird species. Although the Snowy Owl is also probably the most recognized owl in the world, the very light races of Great Horned Owls and Barn Owls are frequently misidentified as Snowy Owls. With the advent and more common use of radio tracking technologies in recent times much of what was thought to be known about this spectacular raptor has been completely rewritten. New technologies have shown a much lower population than was previously thought and global warming may make this species one of the vulnerable species in immediate risk. Here you will find photos and a brief field notes section to help identify, find, and enjoy this beautiful owl.

The Snowy Owl is considered the most powerful of the North American Owls. The Great Gray Owls is slightly larger in length although the Snowy is much more massive (up to more than twice the weight) and has a slightly greater wing span.

The Snowy Owl is not likely to be confused with any other large Owl because of its bright white plumage and large size but especially in flight it is sometimes confused. The subarcticus race of Great Horned Owl can also get very light in color although the Snowy lacks its ear tufts. The adult male Snowy Owl can be completely immaculate white. The female is noticeably larger than the male and has more barring. The juvenal male is similar in marking to the adult female; the juvenile female is heavily barred. Details of separating the sexes of this species can be found on its Natural History page.

The Snowy Owl is usually quiet except during breeding or when disturbed. It has relatively small (for an owl) lemon yellow eyes, black bill and talons and feathered feet. its length is 23″ (slightly larger than a Red-tailed Hawk).