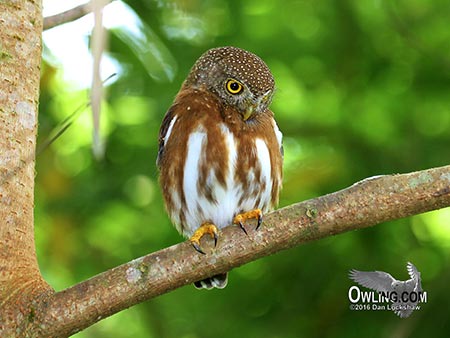 This is the standard territorial call. It consists of a series of hollow ringing notes given at three notes per second. Sets of notes about five seconds in overall length. 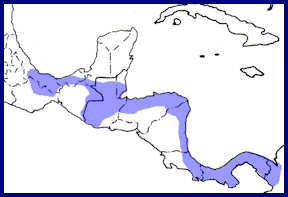 This is a small sized owl (5 1/2 – 6 1/4 in. in length) as are all pygmy-owls. It inhabits humid tropical forests, adjacent secondary forests, and humid semiopen bushland from sea level up to 1300m. It may also be found in mature or abandoned cacao plantatations.It is often found in the canopy and edge of wet forests. There is no overlap in habitat between the Central American Pygmy-Owl and the similiar species found in its range.

It is not known to occur in different color morphs as many of the other species of pygmy-owl are. The Central American Pygmy-Owl is fairly unique in its markings and coloration. The first thing that is noticed is that it has a brownish-grey head (nape and crown) that contrasts with a rich brown unspotted back. The head and nape are distinctly spotted off-white with some trailing spotting into the upper chest. Tail much less barred than in other pygmy-owls with only 2-3 broken tail bars on a dark brown, short, tail. The underside of this owl has rofous-brown markings on a white base. The upper chest is solid rufous-brown with the previously mentioned trailing and minor white spotting from the crest and nape. Rufous-brown marking trail down along the flanks and both sides of the chest in wide streaks leaving a center white streak down the center of the chest from the lower throat into the white belly. Eyes are yellow and it has short white brows.

The Central American Pygmy-Owl, like many of its pygmy-owl cousins, preys largely on other birds. Its diet also includes insects, lizards and other small vertebrates. It hunts by sitting at a perch and scanning for prey, attacking with a swift dash and pounce. Unlike most pygmy-owls this owl is active at night. Although it is still considered a primarily diurnal species it is not unusual to encounter this owl vocalizing at night.

Its call generally consists of a series of hollow ringing notes given at three notes per second. Sets of notes often start at one to one and one half seconds in length and progressively extend to a consistent five seconds in overall length. The sets are given at variable intervals.

Breading: Lays 2-4 eggs in April through May in tree cavity, abandoned woodpecker holes and maybe even openings in old termite nests in the trees. Nesting is poorly known and needs further research.