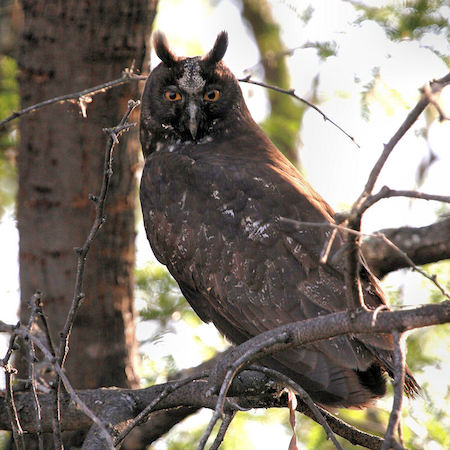 A Reference for Caribbean, North and Central American Owls

The Stygian Owl of the Caribbean, Central, and South America is closely related taxonomically with the North American Long-eared Owl. The similarity seems to end here. Unlike its Long-eared Owl cousin, the Stygian Owl is a sedentary (non-migratory) specialist feeding on flying prey. It is a ghost of the night that is rarely seen with scant research and a barely known biology. Having a large distribution area, it seems this owl really occurs only in small pockets. Here you can find photos, calls and information about this mysterious and poorly studied phantom of the night.

Click on the images below to see larger photos. 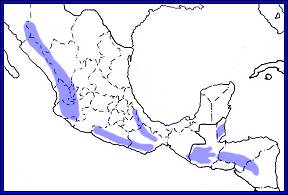 The Stygian Owl, having been studied very little, is a mysterious ghost in more ways than one. Unlike the other closely related members of its genius (Long-eared Owl, and Short-eared Owl) the Stygian Owl is believed to be sedentary. With a vast range that extends from Northern Mexico south to Northern Argentina its actual occurrence is largely conjecture. This is a very sought after owl in Mexico although only irregularly found even in it’s well known “hoots”.

The medium sized, strictly nocturnal, Stygian Owl is 15-17 in. in length. It is very closely related to the Long-eared Owl although much darker and bulkier having a whitish forehead that contrasts with its blackish facial disk. On its upper parts the Stygian Owl is dark blackish brown overall with some sparse buff spotting or barring and very conspicuous ear tufts. Its undersides are buff with prominent dark brown baring. It has striking orange eyes and a blackish bill.

There are potentially six recognized races of the Stygian Owl of which only one or two are found in Central America, one to two in the islands of the Caribbean and two in South America. A. s. lambi which inhabits the mountains of Western Mexico from S.W. Chihuahua to Jalisco is sometimes combined into A. s. robustus which is found discontinuously from Southern Mexico in Guerrero and Veracruz to N.W. Venezuela, Columbia and Ecuador.  A. s. noctipetens that is limited to Hispaniola is sometimes combined into A. s. siguapa which is found on Cuba. A. s. stygius and A. s. barberoi are the South American races found from N. Brazil to N. Argentina.

Rodents make up the largest percentage of all Caribbean, North and South American members of the Asio family’s diet except for the Jamaican and Stygian Owls. The smaller Jamaican Owl feeds on insects but the larger Stygian Owl is a specialist of flying prey. The few pellet studies that have been done with this owl show a very different life story than with the other members of the Asio family. The Stygian Owl appears to feed primarily on flying prey such as bats, birds and some beetles. Certainly, a strictly nocturnal owl which has large percentages of small diurnal birds in its diet opens some interesting questions about how it is possible.

In our covered area, the Stygian Owl is found in both the Caribbean and Central America.  There are two records of occurrence in Texas although this may be the same owl. How this came about with a presumed non-migratory species is of interest although could be explained as a juvenile dispersal. The patchy accepted range for Stygian Owl through Mexico may very well just reflect this species general quiet nature. New records in Tamaulipas in combination with a single very old record could suggest a possible unknown North-Eastern Mexico population. The Western Mexico populations extend south from Sonora to Colima and Guerrero to Oaxaca. Stygian Owl is also found in eastern Mexico along the eastern border of Veracruz and Puebla to Oaxaca.  Further south in Central America it is known from Belize, Guatemala, and Honduras with some range extensions into El Salvador and Nicaragua. The Caribbean hosts Stygian Owl in both Cuba and Hispaniola. Beyond our covered area Stygian Owl also has extensive ranges in South America. Note the occurrence of the owl within its known range is very spotty.

The Stygian Owl inhabits humid to semiarid pine and pine oak forests. It can be found from sea level to the forests at almost 10,000 ft. (3000 m) in elevation.  In Mexico, it is generally considered a montane species that is normally found above 5000 ft. (1500 m) although it can be found at sea level in Belize. It is also considered a “fairly common” species of owl in proper habitat in some parts of its range such as Cuba.

Nesting season is thought to begin in November and extend through May although there are very few actual records anywhere. The Stygian Owl is generally thought to use stick nests built by other birds although young found in Belize have been on the ground (single young), one nest found in the Cuba was on the ground in shredded palm leaves and another in a tree. Last, we know of one nest in North-West Mexico that was found in a tree. The records are almost nonexistent. Generally, it is thought that there are two eggs in the average nest.

It is very difficult to conserve a species that almost nothing is known about. Maybe worse, very little research has been devoted to the owl. Although IUCN/Birdlife ranks Stygian Owl as “least concern” with a declining population, there is virtually no accurate population data to know this. The species is listed as “threatened” in Mexico, considered rare in Veracruz and Belize, “critically endangered” in Hispaniola, and “vulnerable” in Cuba. Deforestation is a clear danger across its entire range. Habitat loss in Mexico is a real concern. Superstitious beliefs about the owl being “bad luck” to being “a witch that drinks the blood of unbaptized babies” opens the door to it being persecuted. Adding up what we know, with there being no clear population data, minimal research having been done, and it being a quiet species that is mostly overlooked, this owl’s future is questionable and concerning.