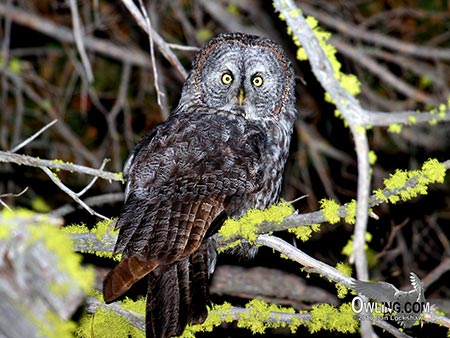 The Great Gray Owl is the largest of the North and Central American owls. Head to tail this owl can be almost 3 feet tall and have a 5 foot wing span. Its large size and lack of ear tufts make it a very distinctive owl. In spite of its large size though it is not the most massive species with both Snowy Owls and Great Horned Owls being heavier. This is one of the few owl species that is found around the world in the northern latitudes. Great Gray Owls are also elegant in appearance, sporting a white mustache that is broken in the middle with a black “bow tie”. In North America, this enormous owl periodically makes massive winter movements where large numbers of  the owls will move south into the northern US. Here you will find photos, range map, recordings and a brief field notes section to help identify and enjoy this beautiful owl. A more in depth write up can be found on its natural history page.

The Great Gray Owl is the largest of the North American Owls but not the most massive (a lot of his size is fluffy feathers). Distinguished by its grayish brown color, large size, “white mustache” and “black bow tie” (white throat and black chin). It has distinctive white eyebrows and lores. Standing 27″ to 33″ tall (about the size of a Turkey Vulture or slightly smaller than a Golden Eagle), the iris of the eyes are yellow, the facial disk has concentric rings, and the bill is yellow to olive green. The Great Gray Owl lacks ear tufts and has a relatively large head with proportionately small eyes. This is a nocturnal owl although largely crepuscular that is often seen hunting at dawn and dusk.