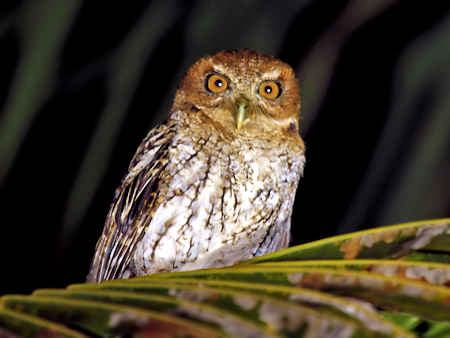 A Reference for Caribbean, North, and Central American Owls

Here you can find photos, recordings, and information about this unique and beautiful owl. The field notes section includes information on habitat, description, history, nesting, behavior, and status.

Please click on the thumbnails below to see larger photos.
There are no sound files at this time. Please check back with us.

Puerto Rican Screech-Owl is endemic to Puerto Rico. Deforestation in the late 19th and early 20th century almost wiped out this owl. A probable subspecies in the Virgin Islands was driven extinct during this period. The closest owl in appearance is the Cuban Bare-legged Owl although the Puerto Rican Screech-Owl does have partial feathering on its tarsi (legs).

This screech-owl is a forest bird but will tolerate small patchy forested areas. In elevation, it can be found from sea level to almost 3,000 ft. Puerto Rican Screech-Owl does not seem to be too picky about its habitat if there are enough trees for cover, food, and nesting locations. Studies have found equal densities in patchy forests with those in larger continuous areas of tropical forest.

Puerto Rican Screech-Owl is like other screech-owls in its foraging, food and feeding. Most this owl’s diet is thought to consists of insects and arthropods with occasional small vertebrates being taken.

Typical of the owl family, the Puerto Rican Screech-Owl does not build its own nest. Nests are thought to be in that which is available. This usually consists of tree cavities, caves, and holes in trees. Nesting season is between April and June. Clutch sizes are thought to consist of one to four eggs with two being most typical. Very little is known beyond this since few actual records exist.

Species that are endemic to the islands are of special concern since they can be easily driven to extinction. The Puerto Rican Screech-Owl is another prime example of this. Most people are familiar with the Galapagos as having unique creatures although do not relate this to the islands of the Caribbean. These islands also have endemic and unique species. With so little research having been done there is very little that is really known about the specifics related to the life histories and the details of the owls of this region. Although the population of the Puerto Rican Screech-Owl appears to be stable, this is a small island with an increasing human population that has little regard for their unique wildlife. What is thought to have been another race on the US Virgin Islands was driven to extinction as the tropical forests were decimated. Only 3% of the natural forests remained on Puerto Rico as late as 1949. The remaining tracts of forests in Puerto Rico were those that remained around shade coffee farms. The owls did not escape persecution here either since in folk beliefs the owls ate coffee beans! Since it was also once commonly thought that eating the owl’s heart would cure asthma, thankfully the superstitions surrounding this owl are slowly disappearing .