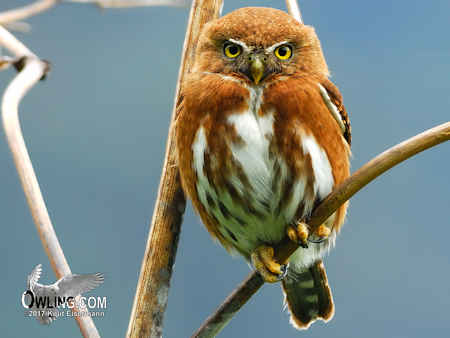 Guatemalan Pygmy-Owl is a new tentative division to the pygmy-owls in Central America. Both pygmy-owls and screech-owls of Central America have long been confusing, poorly studied, and/or defined. Just now are these owls beginning to become clarified and understood in science. The gnoma pygmy-owls have long been lumped into one big collage of owls. Konig and White (2008) suggested a much cleaner division of the Northern Pygmy-Owl into four species which we have followed here on owling.com. Some of the most recent research on these species (Knut Eisermann and Steven H. G. Howell 2011) focuses on the vocal differences between Mountain Pygmy-Owl and Guatemalan Pygmy Owl.

Below you can find photos, sounds, description, and information on this poorly studied species of owl in Central America.


To jump immediately to any of these sections use the Page Tabs below.

Click on the images below to see large images of this beautiful owl.
There are no recordings at this time.

Until very recently pygmy-owls have been thrown into one big group of Northern Pygmy-Owls. Science is still struggling with dividing up this group of owls into logical order so that it is known what is what. Without this knowledge, complete species can disappear. There are financial motivations for this to NOT be known and pressures to define species only in the broadest terms. If an animal, bird or owl is broken up into smaller more precise biologically unique species, if they exist, we can protect biodiversity and we don’t learn somewhere in the future that we have destroyed complete species. Defining a species as unique generally puts restrictions on developing land where small specialized groups of animals have evolved, like we see in the well-known Galapagos Islands. Guatemalan Pygmy-Owl is one of these species.

Guatemalan Pygmy-Owl exists in both red and brown morphs although the red form is more common. The brown and red morphs are similarly marked although the brown form tends to have slightly brighter white markings and is brown rather than red. The red form of Guatemalan Pygmy Owl has a reddish-brown back, and head with pale white spots. Tail and outer primaries are darker rufous brown. Tail has 5 to 8 bars of buffish spots. “False eyes” are black spots on hind neck with buffish white rim.

Nocturnal owl divisions can be made strictly on vocal differences. As a matter of fact, owls are defined by call. They find each other, breed, and evolve through their sounds. It must be this way so a smaller owl in the darkness of night does not respond to a larger owl and get eaten. Guatemalan Pygmy-Owl is though, primarily a diurnal bird (active in the day). There is a fair level of dispute with diurnal owls whether vocal pattern is exclusive to species. Without getting into a lengthy discussion here, Guatemalan Pygmy-Owl has a distinct and separate range from its closely related Mountain Pygmy-Owl cousin and it does have a unique call. Species divisions in pygmy-owls based on vocal differences have been supported by DNA sequence data (Heidrich et al. 1995, Wink et al. 2008). At this point we feel this is enough to divide this into its own species and present it here.

Guatemalan Pygmy-Owl is found in the mountains east and south of the Isthmus of Tehuantepec (the narrowest strip of land in Mexico between the Pacific and Caribbean) from Chiapas south through Guatemala, and Honduras. Mountain Pygmy-Owl is found in the mountains north and west of Isthmus of Tehuantepec from Oaxaca, Mexico north to Southern Arizona in the US. All the pygmy-owls are allopatric (separate, non-overlapping ranges) which makes identification easier.

Maybe the biggest concern for all owls (and most wildlife) is a lack of knowledge. Guatemalan Pygmy-Owl has a very limited range. Almost nothing is known about this species nesting biology, life history, or food. The range being restricted to a few Central American countries with questionable wildlife concerns combined with this being a forest species that often faces uncontrolled pesticide use and habitat destruction, spells danger for this owl.