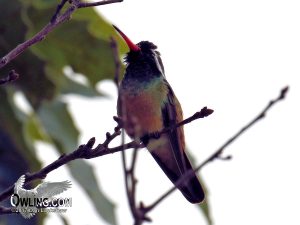 Baja California is home to six endemic species of birds. Although owling.com generally deals with only the owls, one of the six endemic Baja California species is an owl. So, while at the Cape, of course looking for owls, here is a brief preview of all the endemic bird species. These are all easily found in the right places and habitats. Several other interesting Central and North American bird species can also be found in Baja California.

The six endemic species of birds found in Baja California are: Cape Pygmy Owl (see it on the Cape Pygmy Owl species page), Xantus’s Hummingbird, Gray Thrasher, Belding’s Yellowthroat, Baird’s Junco, and Cape Robin. Other potential future splits in Baja may include LeConte’s Thrasher (Vizcaino Thrasher), White-breasted Nuthatch, and Acorn Woodpecker. In this article, we have added photos and some brief information on each of the endemics. The owls of Baja California are covered separately on the owl species pages within the site.

Gray Thrasher is endemic to about the lower 2/3 of the Baja California Peninsula.  The only other spot or streak chested thrasher in Baja is the Sage thrasher which is only there in winter and is smaller with a much shorter bill. The Gray Thrasher has a medium length down curved bill, forages on the ground but may sit on a higher perch to sing.

San Lucas Robin, like the Baird’s Junco, is endemic to the southern mountains of Baja California Sur. It has a much lighter, buff colored, chest than its close relative, the American Robin. This is a striking Robin that is reasonably frequent in the mountains.

Xantus’s Hummingbird is endemic to the lower half of Baja California. The key characteristics of this hummingbird are the cinnamon under parts and in the tail, white stripe above the eye, green throat, black forehead (male) and bright red bill with black tip.

Mangrove Warbler is not endemic to only Baja California. It also occurs in the mangroves down mainland Mexico into lower Central America. In North America it only occurs in very small numbers along the southern tip of Texas. It is currently considered a race of Yellow Warbler. This may change, though, in the future as there has been much debate related to this bird. It is certainly quite different in appearance from our North American Yellow Warblers. We have included it here because we believe it is worth keeping an eye open for while in Baja California.