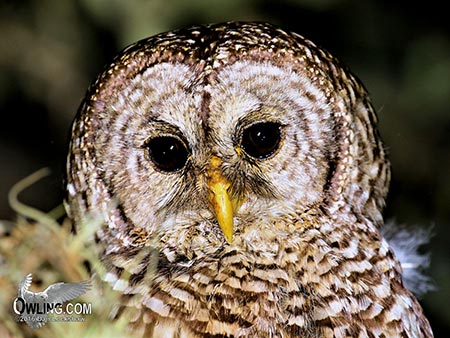 The Barred Owl’s range is expanding west, now all the way to the north-west coast of North America, where it is slowly displacing its slightly smaller resident cousin, the Spotted Owl. Here you will find photos, recordings and a brief field notes section to help identify and enjoy this beautiful owl. A brief comparison of the Spotted and Barred Owls is given in the field notes tab below to help separate the two similar owls in the field.

Click on the owl photos below to see the larger photo.

This is the territorial call (male). Both male and female give this call. The female’s voice is a higher pitch.

Male and female territorial calls. This set begins with the lower pitch male call and then is joined by the higher pitch female.

This set is both a male and female calling. The beginning of the set is dominated by a female’s territorial challenge call.

The Barred Owl is similar in appearance only to the Spotted Owl and is unlikely to be confused with any other owl. There are some distinct differences that make these two owls distinguishable though. The most visual distinction is that the Barred Owl has brown vertical streaks on its underside where the Spotted Owl has short brown horizontal bars (and spots on its crown). Barred Owl also has a distinctive sharp break between its vertical chest and flank streaks and lateral throat barring. Somewhat appears like the Barred Owl is wearing a scarf. It is also a lighter brown color overall and slightly larger (if they happen to be sitting next to each other this is quite noticeable!).

Both Spotted and Barred Owls have bold calls in the forests but they are significantly different. The primary territorial location or advertisement call for the Barred Owl is often described as “Who cooks for you; Who cooks for you all?” or “You cook today; I cook tomorrow” (most noticeable is tone and pattern since the two owls have many variations). Male and female Barred Owl vocalizations can be found on the Audio Recordings tab.

Eyes (or iris) of both the Spotted and Barred owls are dark brown to black, the bills are horn to yellowish in color and they lack ear tufts. The sexes are alike in appearance although males and females can be distinguished by call (female having a higher pitch). Length of the Barred Owl is 21″ (slightly shorter in length than a Red-tailed Hawk).