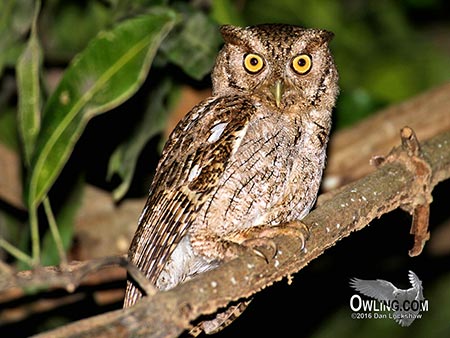 The Pacific Screech-Owl can only be found right along the pacific coast from Oaxaca to Costa Rica (maybe only as far north as Chiapas). It is extremely similar to the Oaxaca Screech-Owl that inhabits the northern extents of its range in Oaxaca (see Oaxaca Screech-Owl for comparison of these two species). It has also been compared to the Vermiculated and Western Screech-Owls but, of course, has a distinct call, different markings, and range. Here you can find photos, recordings and information to help identify and enjoy this beautiful owl. The Field Notes section includes a Central American range map and information on nesting, habitat, description and identification.

This is actually three owls. The first short vocalization (a contact call) is a lone male. This is answered by a paired male then female (primary advertising and territorial call).

This is a male’s primary advertising and territorial call. This is the most common call heard in the field. 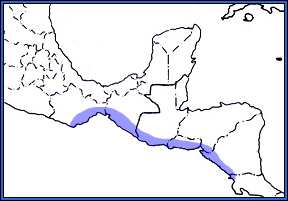 The Pacific Screech-Owl is a strictly nocturnal owl (active at night), and is rarely seen and/or heard in the day unless flushed. It is a medium-large screech-owl that is slightly bigger that the Western Screech-Owl (9-10 inches in length = ~Quail size). The Whiskered and Guatemala Screech-Owls do have some close ranges although these owls are not know to overlap. Generally the Pacific Screech-Owl also prefers a dryer and more open habitat than these other screech-owls. It is larger than both the Whiskered and Vermiculated Screech-Owls although caution should be taken when identifying this owl and, as with most of the screech-owls, should always be confirmed by their call (these owls all have distinctive voices and calls). Oaxaca Screech-Owl having a longer tail, reddish underside markings, and different call may be an exception to the ease of separating this species since it may be found in the same area.

The Pacific Screech-Owl is found only along the Pacific coast from about Central Oaxaca, Southern Mexico to about as far south as Central Costa Rica. The extents of its range in Oaxaca is not clear and our range map shows what is classically defined although research is sadly lacking. It is generally found in semi-open country with scattered trees from sea level to 3000 feet (1000 m.) in elevation. Also found in mangroves, giant cardon, cacti, lakeside fields swamp forests and less numerous in evergreen forests.

This owl roosts in the day in thickets or tree holes and is more easily flushed than most owls. It often becomes active soon after dark and may be seen on low and/or open branches and fence posts. It hunts mostly large insects such as moths, beetles and scorpions pouncing or flycatching from an open perch. It inevitably also takes some small rodents.

Breeding season for this owl is in the dry season, presumed to begin in March. Nests in knothole, woodpecker hole or natural cavity and lays 3-5 eggs; young seen in May. Family group remains together until early into the wet season. Although no population estimates are available, the Pacific Screech-Owl is not considered threatened and is fairly common to common within its range.

Although slightly larger than the Vermiculated Screech-Owl, the Pacific Screech-Owl has dark thin vertical streaking and dense lighter cross hatching on the underparts. This pattern differentiate this species from other screech owls except for the Oaxaca Screech-Owl which is best separated by call although slightly smaller.