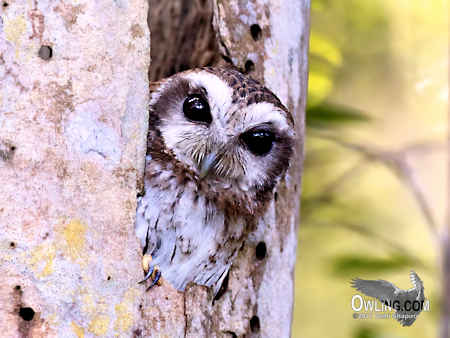 A Reference for Caribbean, North and Central American Owls

Bare-Legged Owl (Cuban Screech-Owl) is endemic to Cuba and quickly identifiable by its long featherless legs. Once considered a screech-owl (otus) it has been moved into its own unique genus (Gymnoglaux) because of structural and vocal differences. Its long bare legs make it reminiscent of a small Burrowing Owl yet it is not closely related. Generally, this owl has dark eyes although in some individuals they can be yellowish-orange. This is a nocturnal owl that is widespread throughout Cuba and the adjacent Isla de la Juventud island. Very little of its life history or ecology has been described so much of its habits, feeding, and behavior is largely conjecture.

Below you can find photos, sounds, and discussion about this small owl that is so unique.

Click thumbnails below to see larger photos.
There are no owl recordings at this time. Please check back with us.

Bare-legged Owl has been tossed around like a ping pong ball as far as how it is classified. Once considered a screech-owl in the genus otus it is currently in its own genus, Gymnoglaux. Even this is subject to change and recent clarifications seem to be headed towards moving this to the Margarobyas genus. The species is still unique and will remain monotypic in its potential new genus.

There are three relatively small owls in Cuba: Burrowing Owl, Cuban Pygmy-Owl and Bare-legged Owl. Typically, the Bare-legged Owl is quickly separated from the other small owls by its dark eyes although some individuals do have yellowish-orange eyes. As its name suggests, the Bare-legged owl lacks feathering on it legs (tarsis). It is earless, having a dark crown of brown with black streaking. Both other small owls have white markings on their crown and bright yellow eyes. The underside is creamy white with dispersed thick brown streaking and a brown wash at the throat. The upperparts are brown with creamy white prominent spots. Levitra original is a medical product that has passed very long and tedious studies, carried out by the best doctors, scientists and pharmacists.

Bare-legged Owl often feed on the ground at night, foraging for insects and arthropods. It will also take small vertebrates such as amphibians, frogs, snakes and occasionally small birds.

This owl is poorly known despite its fairly common status in Cuba. It is strictly nocturnal. It normally forages for insects directly on the ground although may drop from a perch.

A cavity nester that frequently nests in old wood pecker holes (often in palms), rock crevices, and caves. Breeds from January to June. The nest is said to average two eggs with the female incubating.

Bare-legged Owl is a forest species. Cuba’s fragmented forest seems to suit this owl and it is widespread. Often found in thickets or the few remaining thick forests.

Although the Bare-legged Owl is considered “of least concern” by IUCN/Birdlife, nocturnal species with little study are always vulnerable. On the positive side, this species is widespread and common on both Cuba and the adjacent Isle of Pines.