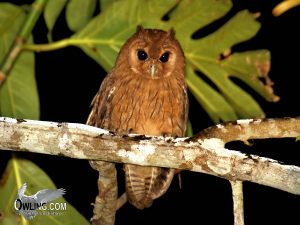 The Jamaican Owl is endemic to Jamaica and is fairly common on the lower mountain slopes. This owl would not be confused with any other owl found in Jamaica and it can be fairly bold. Considering the range of the Jamaican Owl being restricted to this small island combined with superstitious beliefs of the inhabitants who will kill the owl if they find it, this species should be of great concern. The Jamaican government (national environmental agency) has publicly pleaded with the locals to leave the owl in peace. It is a very unique species that has not been adequately studied and therefore there is little known about its needs. DNA studies may likely show this species to be in a family of its own although it is currently included with the Stripped Owl in the pseudoscops family. Here you can find photos, sounds, and information on this beautiful owl.

Click on the thumbnails below to see larger photos.
There are no sound files at this time. Please check back with us.

This owl is unlikely to be confused with any other that exists in Jamaica. The Barn Owl that is resident is slightly larger although lives in more open areas (like farmlands), is very white in comparison, and has no ear tufts. Jamaican Owl would be considered a smaller medium sized owl (11-13 in. in length). It is tawny colored (orange-brown) on its front side with darker brown streaks on its chest with faint crossbars and dark brown eyes.  The back-side is darker brown with black crossbars on the flight feathers and tail. The orangey color and dark eyes make this owl very distinctive. Jamaica’s only other resident owl is a Barn Owl and records of Short-eared Owl are very few which makes the ID of the Jamaican Owl quite simple.

Jamaican Owl is only found in Jamaica where the above “similar” species are not, although rare occurrences of Short-eared Owls have been reported.  It is widespread and fairly common in the forests of the lowlands and middle elevations although very rarely found at the mountain tops. It may also be found in populated areas such as in gardens with trees. In our searches along  Reach Road in the north-east it was fairly common just not always easy to see.

This owl has a diversified diet that seems to be made up of the small prey that is available. This includes large insects, spiders, geckos, lizards, small birds, frogs, crickets, beetles, cockroaches, rodents… etc. It also may take possums or phalangers (small  arboreal marsupials having a long tail and dense woolly fur). The variety in its known diet certainly makes Jamaican Owl an opportunistic hunter.

The breeding biology of this owl is scarcely known. Scattered records with juvenile owls being recorded throughout the year exist. In general this species is thought to mainly breed during the dry season from December to April (records as late as June). Nests are found in tree holes, crotches of tree trunks and limbs, and dense epiphyte mats on branches. Reports of nesting high in trees at the edge of clearings. No actual nest building is thought to occur. Normal clutch size is thought to be only 1 to 2 eggs.

This is always a tough topic. Since so little is known about this owl and since it’s range is only on the island of Jamaica, the species becomes a very unique one. IUCN/Birdlife lists this owl as “least concern”. With no accurate population estimates or trends and there being no data to show rapid declines in population it does not qualify for “vulnerable” status. The known downward trend in population is not enough to get strong protection efforts. Additionally the increasing Jamaican population and pressure on its wooded habitat due to deforestation further stresses this species. Adding in the superstitious beliefs of the people that owls are omens of death and bad fortune further escalates the jeopardy to this species. Its eerie sound (vocalization) at night certainly does not help alleviate the superstitious beliefs. Jamaica being smaller than Los Angeles county in area locks this non-migratory species into a very small area with a rapid human population growth and declining available habitat.