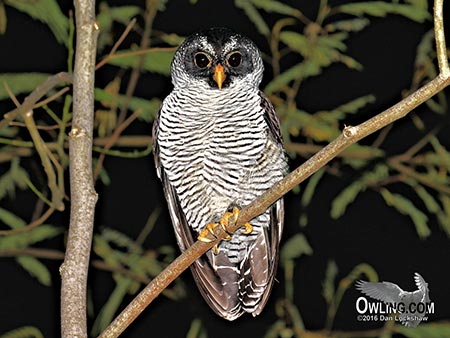 The Black-and-white Owl is very distinctive and unlikely to be confused with any other Central American Owl. It can found in both Central and South America. Here you can find video, photos, recordings and information to help identify and enjoy this beautiful owl. The Field Notes section includes a Central American range map and information on nesting, habitat, description and identification.

This “agitated contact call” is given by the female and may be associated with territorial disputes.

This is a pair of owls calling with a primary advertising and territorial call. The first and third (last) lower call is the male and the middle (higher) call is the female. This is the most commonly heard calls in the field.

This is very simple contact call that may be repeated over and over. 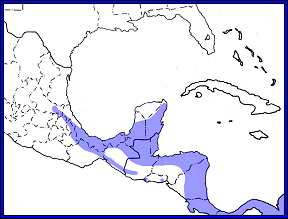 The Black-and-white Owl is a medium size owl (15-16 in. in length). Its size is similar to the other medium sized owls like the Barn, Long and Short-eared Owls. There is no similar owl in Central America although the Black-banded of South America is similar and was once considered conspecific. The Black-banded does have a different call, slightly different markings (no solid black on the head, and white bars on its back) though.

The Black-and-white Owl has very conspicuous orange to orange-yellow feet and bill. It has a black face with white speckled eye brows and dark brown eyes. Its stomach, chest, neck and hind neck are white with thin dark brown bars. Its backside (or upper part) is dark brown with a few thin white bars on the tail and primaries.

The Black-and-white Owl inhabits humid to semi-humid evergreen and semi-deciduous forests, plantations and tall mangroves. It may be found near villages, forest edges and clearings, and woodlands near rivers or swamps. In Mexico it can be found from sea level to 3900 ft. in elevation, in Panama up to 6800 ft. and in Columbia up to 7800 ft. in elevation.

The Black-and-white Owl is strictly nocturnal (active only at night). It feeds mainly on insects but will also take small mammals. It normally hunts from a perch but will also catch bugs and bats in flight, sometimes under artificial lights.

Nesting season begins in late March and extends through May. It nests in tree holes, in the crotches of large bromeliads, sometimes among the epiphytes or orchids living on large trees, and even said to occasionally use old stick nests. It usually has 1-2 eggs.

The voice of this owl is similar to the Spotted Owl’s. The pattern of the call is different but the tones sound quite a bit like those of a Spotted Owl. This call is described as “who-who-who-who-WHOW-whoh”. The call has and rapid series of notes that increase in tone and volume then may have one final lower note. Other vocalizations have also been described. ** See the Audio Recordings tab. **