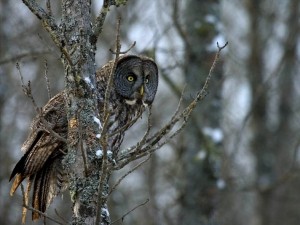 2004 is the year of the Owls in Minnesota which is experiencing a record owl invasion. The first date for Great Gray Owl sightings called into the Minnesota Ornithologists’ Union (MOU) Rare Bird Alert was 17 August. There were a total of three August records, one September record, and several more in the first week of October. We cannot tell if these were resident birds.

First report of Northern Hawk Owl was 3 October. The assumption is that this is not a resident bird. Boreal Owl was first banded on 17 October. Frank Nicoletti and Bill Lane were banding Boreal Owls along Lake Superior’s north shore this fall and began getting them in large numbers, with more than 300 banded since October. The majority of netted birds were healthy, not underweight, and female. This leads to conjecture that this may be, at least in part, a natural dispersal of females and not due to the result of stress from dwindling food supplies.

The male Boreal typically holds to his breeding territory until stress induces him to move. A thick hard layer of ice or a crash in the Red-backed Vole population — their primary food source — often results in a Boreal Owl invasion year. Banding has been intensive this year, so perhaps the influx of Boreals in good condition is not so exceptional. Boreal Owls were still very hard to find away from the banding nets as of New Year’s Day. They are one of the most nocturnal of owls, and Steve Wilson, DNR wildlife specialist, notes that Boreals not yet found hunting in daylight suggests we do not yet have stressed birds. 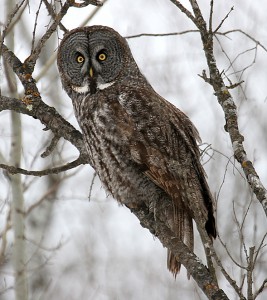 In November, large numbers of northern owls began hunting along roads in central St. Louis County, especially in the Sax-Zim Bog area. Elements contributing to stress can be different among Great Gray Owls (GGOW), Northern Hawk Owls (NHOW), and Boreal Owls (BOOW). GGOW and NHOW use microtine voles as the majority of their diet — primarily Meadow Voles. When these rodent populations crash, this exerts stress on the owls.

James Duncan has monitored small mammal populations in the Roseau Bog area of northwestern Minnesota since 1986. The 2004 fall populations were the lowest on record since 1992. In the winter of 1991-92 the record number of Great Gray Owls was 196 and the record for reported Northern Hawk Owls in Minnesota was 142. That same winter, only three Boreal Owls were noted.

A similar invasion appears to be happening this year. Meadow Voles breed throughout the winter while tunneling under the snow. They can breed at two months of age, and with an adequate food supply and proper habitat their numbers can explode. Red-backed Voles do not normally reproduce in the winter, and prosper under a forest canopy which prevents the snow from forming a hard crust. Boreals are reported to have an affinity for sheds and woodpiles, both great habitat for Red-backed Voles, Deer, and White-footed Mice.

There have been over 1300 reports of GGOW, 200 NHOW, and 300 BOOW. This compares to last year’s more typical numbers of 35 GGOW, 6 NHOW, and 1 BOOW. This is indeed a banner year. Without the banding, we may never have known the magnitude of Boreal Owl movements this year. We are all waiting to see what comes of this. How far south will each species travel? Pine County and Aitkin County, about 70 miles south of Duluth, each have areas where GGOW and NHOW are often seen each winter.

The Minnesota Ornithologists’ Union (MOU) is looking for data on these owls. It is important to collect as much data as is possible.

1. A correctly identified species
2. Date of observation
3. A specific location. Locations are usually the weakest part of a record. Observers might say “I saw this bird on highway 30 just past Mud Lake”. Problems with this kind of information would be, which Mud Lake? There are more than 40 in the state. What kind of highway is “Highway 30”? The term “highway” could mean a state road, a county road, an interstate, or a U.S. highway, and most everyone uses the term freely to mean any one of those. If it is a county road, then they should use that term. Simply saying “highway” is ambiguous and requires someone to take the time to correctly interpret the information, so clarity and certainty may be compromised. And finally, “just past Mud Lake” could be greatly improved with exact mileage, GPS coordinates, or something more specific.
4. Observers’ names and contact information

There is a data base of all known NHOW, GGOW, and BOOW records from this season being collectively kept by the MOU. Records of sightings should be emailed to the MOU at mou@cbs.umn.edu.

Now spread throughout the northern half of the state of MN are these great birds. Large numbers were first discovered in Sax-Zim. The owls have now dispersed. They are now more widespread. The numbers of birders driving and stopping on the roads, using scopes and cameras in front of local residents’ homes, has created stress on the good people that live in this part of the state. If you get a chance to visit, please come, but hook up with a guide or a member of the MOU to find where to go. We need to lessen the burden of our birding soon on this small area.